My PocketBook 840 e-book reader recently started some weird behaviour: While it was running everything behaved normal but when turned off and on again, it did not remember the file that was opened nor the page I was viewing last. In fact, it did not remember any settings that I changed and even when I deleted files they were back again after a restart.

A quick research on the internet showed that this seems to be a quite frequent issue of PocketBooks. As others figured out this is caused by the internal memory of the device being broken and now being in a read-only mode. This means the reader still works normally but any change made will be lost after a restart.

Fortunately, the PocketBook 840 (and a number of other PocketBooks) uses a regular microSD card as internal memory so you can easily replace it yourself. There is just one caveat: The device checks the CID (serial number) of the card so it needs a bit of hacking to make it work with an other card. The good news is that we live in the age of internet and there are people who already figured out how to do this. Please note that all the credit for this solution goes to the people in this forum! I am merely providing a concise description of the final procedure so there is no need to read through several pages of forum discussion.

Note that I am referring here to my PocketBook 840 but the same steps should also work for some other models (e.g. the forum discussion is based on the 626).

The basic steps are as follows:

What you need before starting:

Preparations Before Opening the Device

As mentioned above, the software of the e-reader checks the CID of the internal microSD card and will not start if it does not match the expected value (it will just show a rotating hourglass forever). The hack to make it work with a new card consists in extracting the CID of the original card, storing it in a file and patch the software to read it from that file instead of the actual card.

To simplify this, nhedgehog provides a little script in the mobileread forum which easily extracts both the CID of the card and the application that needs to be patched from the running device.

For this, perform the following steps:

Open the Device and Remove the Internal Memory Card

With a bit of carefulness the back cover of the device can be removed without damaging it. There are now screws, it is just clipped with a lot of clips, so it can be removed by using finger nails or some thin piece of plastic. See also this article on how to open it.

Once opened, the internal memory card can easily be removed by removing the tape, pushing the card a bit towards the smaller side and then release. The wider end should come up so that you can pull the card out. Simply invert the steps to put the card back in later. 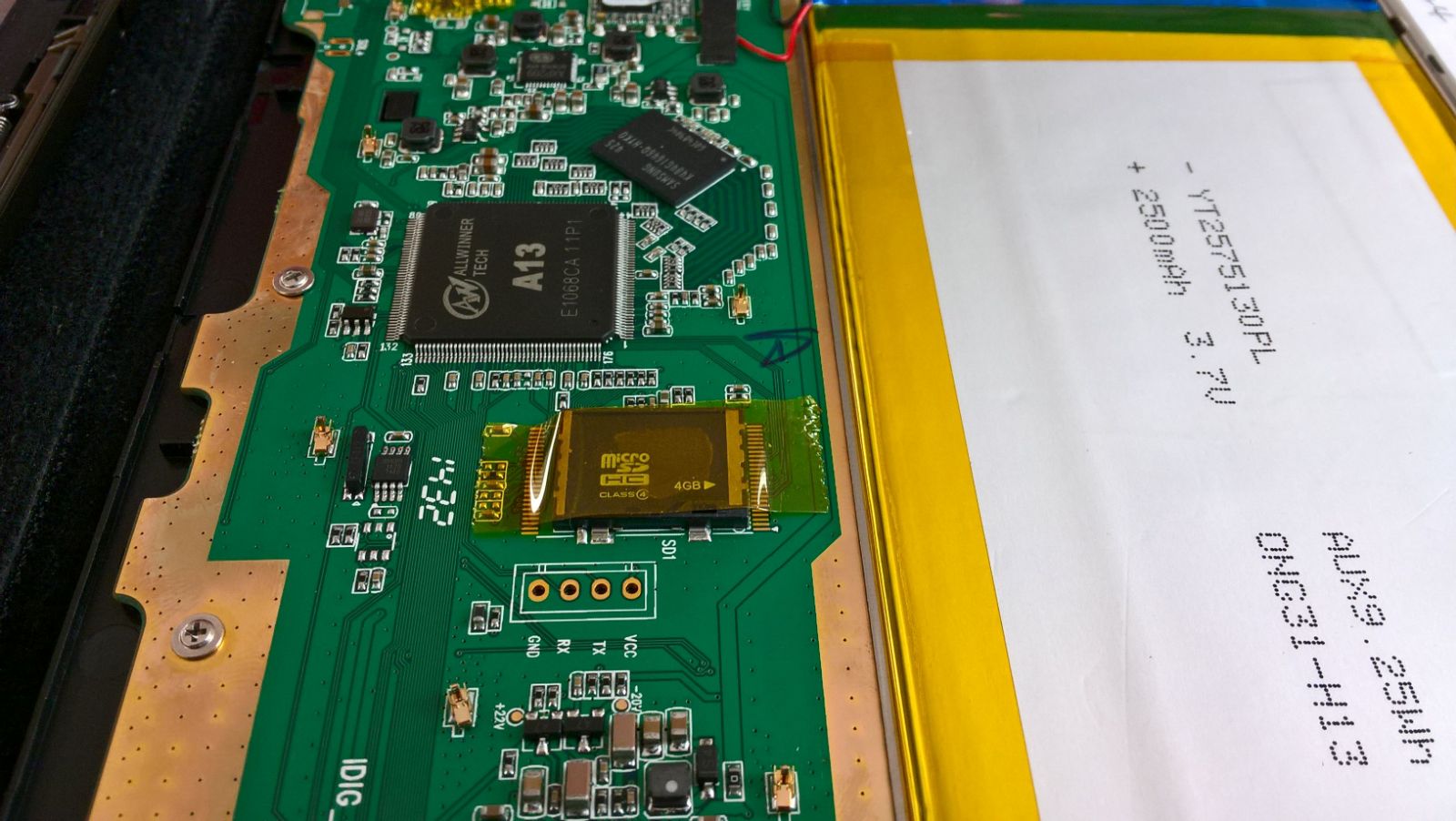 Copy and Patch the Image on a New Card

As already mentioned above, all the credit for finding this solution goes to the people of mobileread forum, mainly to the users nhedgehog and m4mmon. Thanks a lot to them for spending all the time on finding the solution, improving it to make it more easily applicable and sharing everything with the rest of the world!

Further thanks to PocketBook to make a device that can be opened and the memory be replaced without destroying it (but a non-thanks for actually preventing the user to do this on the software side…).